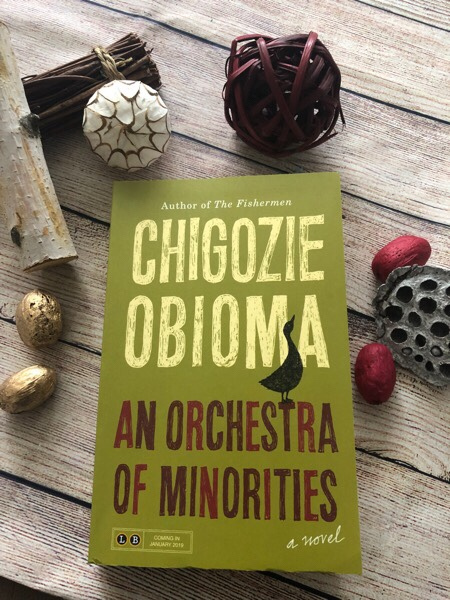 The novel, An Orchestra of Minorities, details the travails of Chinonso Solomon Olisa, a modest Umuahia-based poultry farmer, who falls for Ndali, a rich man’s daughter. Humiliated by the rejection of his lover’s family on account of his insufficient learning, Chinonso decides to acquire a university education scuttled by family misfortunes. A Cyprus-based childhood acquaintance convinces him to head there, where he can obtain the B.A in record time.

Chinonso sells his business and the property inherited from his father, to pay his way. In Cyprus, he finds that he has been duped by his supposed friend. That notwithstanding, he re-strategizes to work and bounce back on track only to end up in jail for a crime he did not commit. At the end of his incarceration, he is deported to Nigeria, no better education- wise than when he left. On return, he discovers that Ndali has married another man. His sufferings and cries are part and parcel of those of the vulnerable masses worldwide at the hands of their oppressors which make up the book’s title.

An Orchestra of Minorities is an epic work that delves into the Igbo cosmology and traditional belief system as gleaned by the author from research works and previous writings. It basically assumes that there is a god, Chukwu, at the zenith of the universe. Chukwu is called by many names in the book, Akwaakwuru, Chukwuabiama, Obasidinigwe etc. and is served by a host of bodies, spirit and human.  At the bottom of the hierarchy, is one’s personal god or chi. This chi is much like the Christian guardian angel. It witnesses its ward’s shenanigans and choices. It is there in times of vacillations and in its own way, plays an advisory role, sometimes ignored by its host.

The novel is a plea for clemency and understanding undertaken by Chinonso’s chi to Chukwu, to temper justice with mercy in judging the protagonist. The chi, being ubiquitous and indeed the protagonist’s alta ego, is the omniscient third person narrator. In using this narrator, Obioma has deftly worked a new technique in the management of story-telling.

An Orchestra of Minorities draws heavily from the Igbo worldview in terms of proverbs which convey in a picturesque manner, the realities of Chinonso’s cursus vitae. From this perspective, Obioma can be described as Chinua Achebe’s literary heir. His imagination is very fecund. The universe he creates in the novel is believable and fantastic in the original sense of the word. We are not, however, dealing with a story of the colonial or post-colonial era. It is a modern, contemporary tale, with references to technological tools like mobile telephony. Obioma’s style also is Rushdie-esque in the patient recounting of the quotidian and repetitive minutiae of life. The nitty-gritty of Chinonso’s chores in tending his birds, is described in the minutest detail. In addition, the humiliation he suffers at the party of Ndali’s father, bespeaks Rushdie. From that perspective, the author is a crossbreed of Achebe and Salman Rushdie.

The characterization is carefully crafted. The characters  are real: the rich man’s family that snubs the less privileged, the repentant con man turned tongues-speaking man of God, and the protagonist himself, the quintessential struggling man, hustling to survive in a society where the mantra seems to be every man for himself, God for us all.

Is Chinonso a tragic hero? According to Aristotle, the hero must lose his life at the end of the story. This does not happen in the novel under consideration, although one could argue convincingly that Chinonso, having lost his inheritance and indeed the love of his life, could pass for what the Igbo call odi ndu onwu ka nma, that is, a living dead. In advancing extenuating circumstances to the eternal father for a lenient sentence, is the protagonist’s chi not insinuating  that his life is over? Is it not appealing on Chinonso’s behalf, that Chukwu should discountenance his past mistakes and align the stars for success in his ward’s new beginning?

A real hero, like Okonkwo in Things Fall Apart, Othello and  King Lear in the eponymous books, should pay the ultimate price for his credo. Chinonso, in meting out a harsh punishment on his inamorata and running away, falls short of that moniker.

This conclusion in itself is emblematic of the present society. There are no more heroes, no more Okonkwo’s; men who act and remain to bear the consequences. Men of nowadays have become chicken-livered. So, yes, there is an orchestra of whining and whimpering, but it is of the majority.
Ms. Ifeoma Akabogu Chinwuba is the author of several novels including Merchants of Flesh, Fearless, Waiting for Maria and African Romance. She writes from Ottawa.