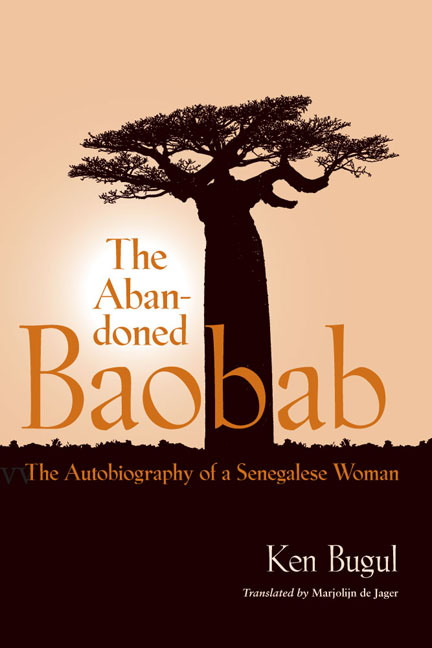 I met Mariétou Mbaye thirteen years ago in Madrid, at a forum for African Women Leaders of Thought, sponsored by the then Vice President of Spain, Maria Teresa de la Vega. Mbaye told me that the public liked her works because of her frankness. Last week, she was one of the invitees at the tenth anniversary of the Institute of African Studies of the Carleton University, Ottawa. Though she was unable to come, I will review one of her books, The Abandoned Baobab, a translation from the French original, Le Baobab Fou. Yes, Ken Bugle is Mbaye’s pen name.

The fruit of a  baobab tree is plucked and eaten. Its pit is cast away.  Against all odds, it takes root and like the biblical mustard seed, grows into a robust tree that becomes a meeting venue, a resting point.

TAB is a metaphor for the author’s life as a young black woman, uprooted from her natural milieu to an alien Europe. She is a lost sheep, left to navigate her way without a compass. She is thrown on life’s surge like an unanchored vessel in search of a port in a turbulent sea.

The feeling of being at one’s own mercy is amplified by an earlier abandonment by a biological mother, ousted from the polygamous home when Bugul was just five. Bugul is left anguished, between a distant paterfamilias lost in constant prayer and insouciant extended family members. She is enrolled in a French school where she excels but gradually questions traditional beliefs and mores without being fully assimilated in the foreign culture.

TAB is a coming-of-age autobiography of an adolescent at the threshold of independence, individual and national. It is a cry for mercy of a disillusioned soul that has lost its bearings. It is a condemnation of colonialism which ‘had made inconsequential people of most of us.’ After the exploitation of the country’s resources, African students on scholarship in Europe, are further exploited physically by the white folk. The whites are looking to suck our blood like vampires. Bugul, thrown into the Brussels society, falls prey to the male sharks lusting after an exotic body. It is a descent into hell.

TAB is an introspection into oneself, of the mind perennially asking who am I? and trying to fill in the mental gaps created not only by a ferocious patriarchal society, but also by the superimposition of another inchoate culture. It is Baldwinian in its obsession with ‘the black man’s upheaval.’

The fascination of white folk with the black body could well be the origin, in later years, of the human trafficking of African girls (and boys) for the sex market of Europe. Bugul is told: You are a black woman, you could make yourself a fortune. And again, a woman can be nothing other than consumption.

The beauty of TAB is its frankness. Bugul tells a no-holds-barred story of her trajectory from a promising youth to disenchanted womanhood, passing by her foray into free love, communal living, sexual minorities, prostitution and drugs. Bugul is a patient who lays out the minutiae of her life to the reader who becomes her psychiatrist.

TAB is a gripping read. It is autobiographical: I was born in a region of Senegal they call Ndoucoumane, but not chronological. This seeming flaw actually stems from the stream of consciousness technique. Bugul probably wrote aspects of her life at different times, later merging all into a whole. The introit describes the birth of the baobab. Understandably, this part is told in the third-person narrative and is imaginary.

TAB is a feminist manifesto, a call to solidarity to all women. Through the various female characters, Leonora, Gaelle, Laure, Mother, etc, Bugul’s ‘feminist consciousness was born.’ She condemns the excesses of women who could have served as role models and asks ‘why didn’t women spend more time together in each other’s company?’ seeing that ‘women all had the same destiny.’ Her mother is not spared for abandoning her at a tender age. All her life, Bugul will be marked by this premature loss.

The language of TAB is poetic, esoteric; a broken jar in a thousand pieces seemed to be shedding tears of silver; when the breeze was speaking. The bucolic Senegalese countryside is seen as utopic though its inhabitants may be flawed. The dry sands, the sun, the rains, the savanna, the clusters of habitations, seen from the drabness of the Brussels clime, assume an idyllic and therapeutic aspect and beckon home the prodigal daughter.

With TAB, Ken Bugle has demonstrated that she is indeed in the vanguard of African women leaders of thought.