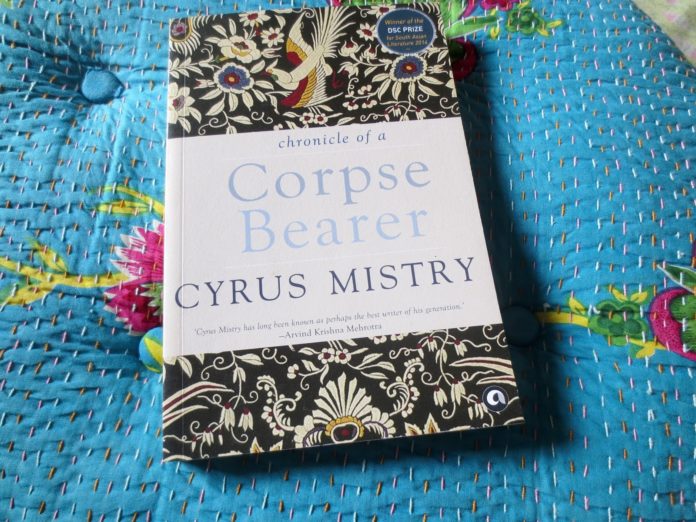 Chronicle of a Corpse Bearer, CCB, is a multi-course meal, from the themes it espouses, and from its language, exceptionally pleasant to encounter. To Antoine de Saint-Exupéry, the dictionary contains all the best sellers; the savvy author knows to arrange the words into a masterpiece. Cyrus Mistry has done this with CCB.

The story details the daily grinding work of a pall bearer in the Parsi community of Bombay in  mid-forties India. This community disposed of its dead by dumping them in the open for carrions to feast on. This open area, a modern-day equivalent of a cemetery, is situated in the Towers of Silence. India’s caste system has the corpse bearers, the khandias, at the lowest rung of the social ladder because they are in constant consanguinity with death, putrefaction, despoilment and contamination. As with most trades, it is a hereditary profession. Also with caste systems, there is downward, but not upward, mobility. Due to the closed nature of the system, there is a lot of in-breeding which leads to the ‘production of freaks, cretins and genetically unsound creatures.’ Sepideh, the love interest of the narrator, is daughter of a pall bearer, Temoo.

Slightly higher on the spectrum of castes are the nussesalars, the caste of priests of the Zoroastrian temple. Phiroze, our narrator, is second son of a high priest and is expected to succeed his father, Farmroze, in this hallowed and sublime atmosphere that, contrary to the cadaver bearers, deals with holiness, purity, beauty, magnificence and reverence.

Phiroze (Piloo) falls in love with Sepideh. In obstinately marrying her, he abdicates from the priesthood sub-caste and descends literally to the cesspit. The caste system has strict rules of segregation. Piloo’s degradation to corpse bearer is total and mighty because he is banished and disowned by his father and cannot even be admitted to mourn his mother at her demise. Dostoyevsky it was who said that love is a harsh and dreadful thing.

So the CCB is a story of love, after all and the humongous price one pays for love. In addition, it is a betrayal and a revenge arising from sibling rivalry and unrequited love. Temoo has set Sepideh up to seduce Piloo and drag him down from his family’s high horse, in retaliation for past wrongs.

Love, in all its beauty and effervescence, is here juxtaposed with the despondency, grief, lifelessness and ‘malodorous malignancy’ that is associated with death.

Mistry also beams his searchlight on the poor working conditions of the corpse bearers and the readiness of their employers to shortchange them at every turn. There is a pandemic arising from an outbreak of gastro or cholera. Logging more corpses than usual, the carriers are entitled to a pandemic allowance. They receive nothing. A strike for better conditions of work is called. The gathering stench and discomfiture of rotting carcasses create a furore among the townsfolk which pushes the management of the Towers of Silence to upgrade, albeit minimally, their sadistic treatment of the menial khandias.

One cannot deal with death without waxing philosophical. There is a resemblance to the Eden story; Sepideh seduces Piloo to eat the forbidden fruit in a garden of the Towers of Silence. Sepideh, herself, will later succumb to a serpent’s bite in the same garden. And Piloo, condescending from a celestial pedestal to the pits, is reminiscent of the divine assuming our humanity in His salvific mission.

Elsewhere, Piloo asks,   ‘Why do you think there are so many strange, new, and incurable diseases in the world? Why do people no longer live to be a hundred and fifty? Why do you think evil has been able to tighten its stranglehold on humankind?’

It is a question that is prescient considering the Covid-19 pandemic currently raging in our world and the images of thousands of morbidities arising from it. If this system of corpse disposal still subsisted in India, a pandemic allowance would be on the negotiating table.

Again, Piloo asks, ‘What is man in the end but the powder of a few dried bones?’

With the present ubiquity of death, mass burials, the uncertainty of tomorrow and absence of obsequies, one is forced to ponder the same question and agree that all is vanity.

Mistry’s syntax is a pleasure to contemplate. It denotes a man at home with the English language and an inordinate observer of nature. A character ‘combs his fluffy sideburns nervously with his fingers,’  while Piloo is urged to ‘bring his sentimental incontinence to an end.’

Indeed, Mistry has, in Chronicle of a Corpse Bearer, rummaged the dictionary pantry and served a delightful, multi-flavoured repast of a masterpiece.